skip to main | skip to sidebar

Can you guess what these items are going to be?

Fimo's drying in oven at the moment, as soon as its ready I'll post the finished picture, must say quite pleased with it so far, was in an imaginative mood! 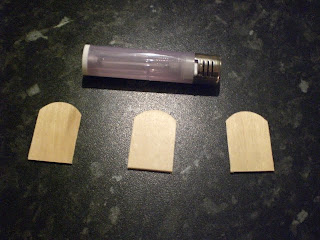 Busy couple of days and after a disappointing Saturday (was going to Kensington Town Hall Dollshouse Festival, but a railway bridge had been damaged in our recent storms and it was going to take over 2 hours to get there, so I decided not to go) I have finally got a few projects finished.
Popped into my local charity shop and found a couple of good bargains for mini projects: a soft silk men's tie in the perfect shade of midnight blue for an evening dress on a mannquin for the dressing room (wish I could find a supplier of tie fabric, the small prints they use are so perfect for miniatures), a wooden block of wood that I think must have been designed for a desk, with a dear little clock set in it. I've already taken it apart and busy painting it a distrssed white for a kitchen wall clock. 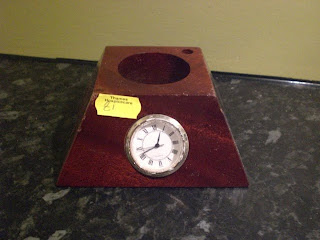 While waiting for it to dry have started on dressing 2 beds that a local shop wants to see, with a view to me supplying them! The first is an adult bed that I've embellished with jewellery findings, and painted white, needs another coat and then distressing 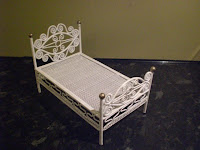 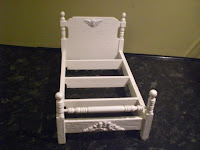 The second is a for a child's bedroom in wirework that I've painted with brass accents. 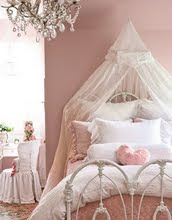 I'd love it to look something like this one, but without the canopy, another gorgeous picture on http://beautifulthingstoshare.blogspot.com/

I'm really annoyed with myself at the moment, don't seem to be making much progress on the kitchen of my house due to getting distracted too much. I've been searching the web a lot looking for a modern tap (faucet) for the sink, to NO avail! If anyone knows of a supplier, please let me know as I can't fit the base units and worktops properly until I find one.
But is it just me that gets sidetracked? I go from one site to another, being nosey and looking at links, only to find that several hours have gone by and no miniature work done at all! I especially get carried away looking at blogs, although this has proved fruitful this weekend as I came across this fabulous blog http://beautifulthingstoshare.blogspot.com/.
I have been searching my reference books and mags for ideas for room settings and think I have found my main source of inspiration, this wonderful blog!!!
Although I love making miniatures I also enjoy interior design projects in 'real scale' and spend a lot of time at car boot sales looking for bargains to revamp into shabby chic or statement pieces for my home or to sell. I also make a lot of my own clothes and do custom clothing and alterations for clients, so this blog is the perfect 'library' in my house. Thank you Beautiful Things to Share, I love you!
So while waiting for glue and paint to dry on the dollshouse, I have found the perfect bed for my Princss Diana bedroom 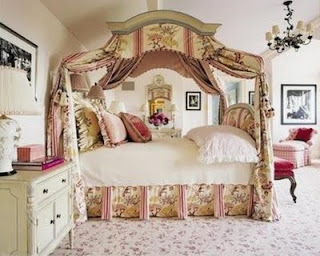 I adore this and wish my home was big enough to have it in real life!!

Found this very nice French Web site, check out the vintage seed packets, ideal to print out for the miniature potting shed or for pictures in shabby frames and the old glass bottles and pots are a great source of reference for decoration. Have fun creating xx
http://www.burgundybrocante.com/

Can anyone help me to copy another blogger's button to my blog?  Have been trying to link someone's Giveaway button to my blog for ages and just can't do it duh!! Giving up for now, I have minis to make!

We  had horrible storms in the  night and I just couldn't slee p, so went blog reading at 4am with sevral cups of tea! What a result, I found this fabulous blog all the  way in Australia and went onto her web site.
http://www.woodberrydesigns.com.au/index.htm She also has a giveaway at the momnt, go visit her blog http://shabbyartboutique.blogspot.com/.

Don't you just love this screen?? I have some  birthday money left that I was saving for some miniatures, so now its going on this screen pattern. Can't wait to get it!! 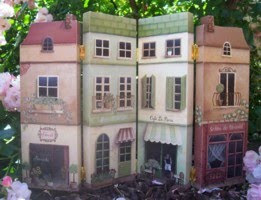 Screen front, a Parisian Street Scene , I know there are lots of us that love  Paris, so it couldn't be more apt!

Below the screen back. 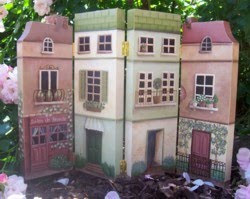 Labels: Back of scrn

This is one of the kitchens that inspired me and made me go the Aga route! 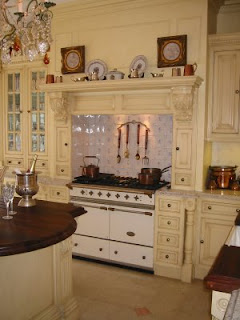 Went to the craft shop for more supplies today. They have a Dollshouse emporium stand there and whilst 'browsing' spied a cream Aga cooker at a very good price. I had previously researched mini Agas and the only one I liked was over £40, which was out of the question! Anyway I bought it. I had made one from balsa but really wasn't happy with it. Here it is not quite finished. 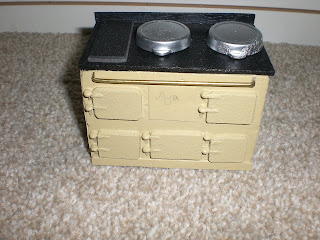 In my haste though, I hadn't thought about measurements (how could I forget the golden rule?) and it was longer than the one I made so didn't fit into the chimney opening I'd made. So heyho had to take that apart and remake plus drill another hole at the back for the wire for the mantel lighting! 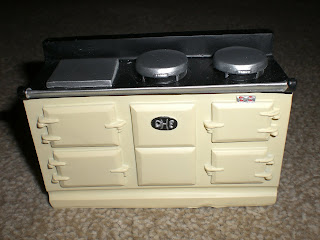 Phew, now have to fit the wall cupboards......hopefully no more disasters!

Before I could decorate the basement I had to remove it from the main house as I had to cut grooves in the ceiling and walls to hide the wiring for lights. I found this most frustrating, as at this stage I had no idea of the final layout of the room, so didn't know where I would want lights! After much pondering I've now decided to postpone the exterior and concentrate on decorating the interior to get a guide for wiring channels, which means much more fun!
The basement will be the kitchen/breakfast room, this calls for a large open plan room, so again I knocked out the dividing walls. Its now a spacious lighter room, much more suitable for a kitchen/diner.
I found superb kitchens on the net for inspiration, but had a massive problem deciding on one that I could build in miniature. I really want to build/make as much of this project myself, mainly due to satisfaction, but also obviously the money factor comes into play, as I only have limited funds like most miniaturists, and I want to save as much as I can for artisan pieces like china, that I can't make myself.

Finally decided on a creamy beige slightly distressed finish for the cabinets, as I love the shabby chic look so popular at the moment and felt this wouldn't 'date' so quickly as the minimal high-tec current kitchen favourite.

The picture shows the start of the layout, so far fairly pleased, but since making the units using foam core, carboard, balsa wood etc and cutting out strips of fine wood and glueing on individually to the cabinet fronts, have discovered wooden coffee stirrers from Starbucks which are exactly the width of the strips I needed!! Will be working on the wall cabinets and worktops today, so will post photos later.

After demolishing interior walls, I then started work on decorating the exterior of the house. Aha not as easy as it sounds! Couldn't for the life of me decide on colours and so spent hours on the internet looking for inspiration. I didn't want the pastel pinks or blues as seen in the dollshouse catalogues, as the house is supposed to be located in one of the fasionable areas of London and they are really 'country' colours. I also had to take into account the position in my home where the house will permanently reside, which is an ideal position as its at one end of my lounge under the eaves of a staircase. However its quite a dark area, so the house shouldn't be an overall drab shade as I want it to be a feature in the lounge. Finally decided on white render for the top 2 floors and grey stone tiles for the entrance floor and basement. The roof will have black slate tiles and white woodwork. 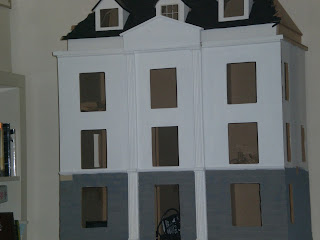 You can see from the photo I've run out of tiles for the roof (and patience cutting and painting each individual tile!)so have shelved this until I get more supplies.

Thank you for the messages and a long overdue Welcome to my new followers. I have had computer problems (mainly due to late night blog-following with a cup of coffee.....and yes got overtired and spilt it on my keyboard!!), so have been unable to update (or should I say 'start') my blog.
I have been very busy with my dollshouse you will be pleased to hear, you might remember I purchased it sort of half-finished. It was a project a couple started from a Dollshouse emporium kit. The husband altered the roof height and made dormer windows to create a usable attic space and then decided to build his own basement instead of buying the kit, this has created a very large house!! However as often happens in this addictive hobby, instead of just helping his wife with the building, he has become totally absorbed and decided the house wasn't big enough for their needs, so he has now designed an enormous mansion that he is building from scratch. Luckily for me they listed the abandoned project on ebay, and I was the extremely lucky winner!
As large as it is, me being me, I was still not satisfied with the boxy rooms, so have been demolishing internal walls!! 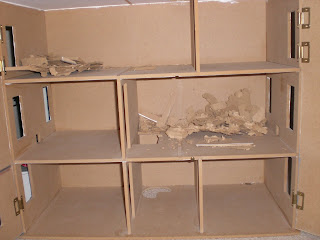 the house as I bought it 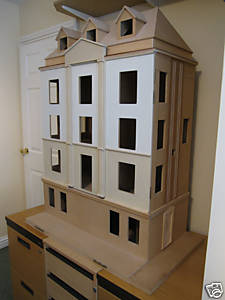 Interior of half assembled house 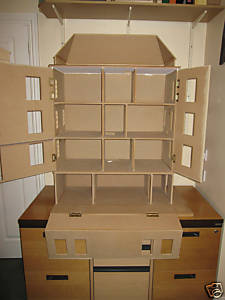 Lyndsey
I am passionate about all miniatures and make 1:12 scale couture dresses for dollshouses and room boxes for all eras, which I sell. I also do custom work for interiors i.e. curtains, covering chairs, etc for'real homes. My main project is to create my dream house which is called "If I Could Turn Back Time".It is to be Princess Diana's home in the 2000's, as though she still lived.I loved our Princess and all she stood for, and greatly miss her...